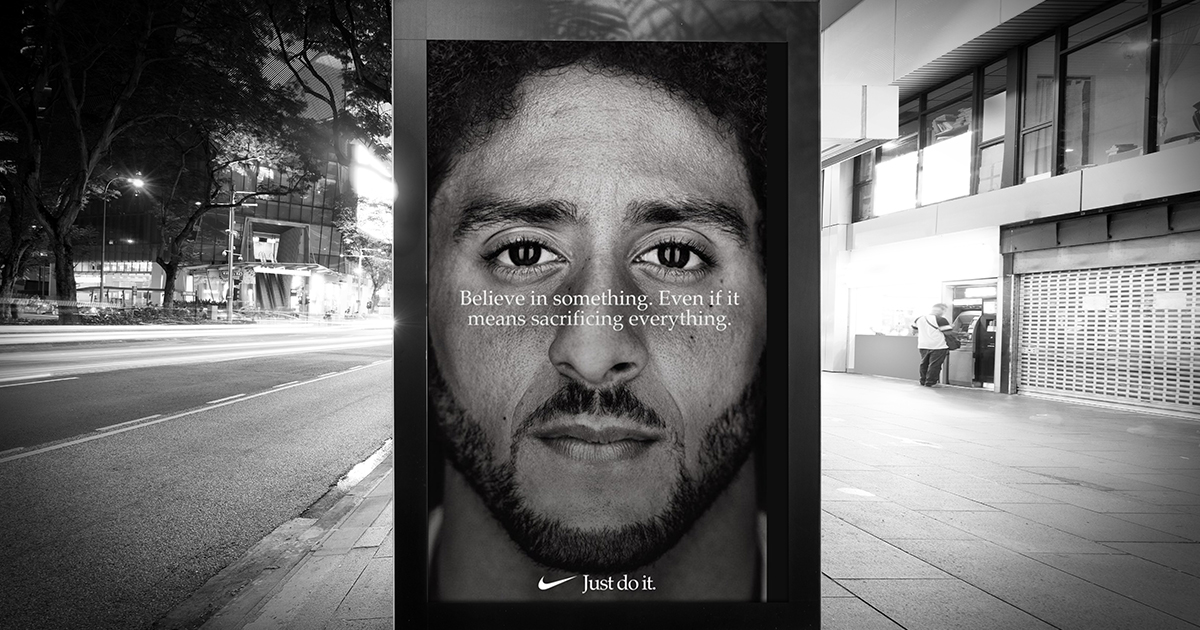 Nike - Just Do it. The 30th Anniversary ad


A few days ago Nike premiered their new brand ad.

It got a few tongues wagging.

The ad celebrates the 30th Anniversary of “Just Do It” and features former NFL player Colin Kaepernick who, in 2016, controversially decided to kneel during the American national anthem as a protest against police brutality and racism, which was met with great support but equally huge backlash, including a vehement speech from Donald Trump, who aped his time on ‘The Apprentice’ calling for him to be “Fired” for disrespecting the flag. Kaepernick hasn’t played a game in the NFL since. He has arguably become something much bigger - A cultural Icon in fact. He has been awarded Amnesty International’s highest honour and in Nike’s words is “one of the most inspirational athletes of this generation”.

The ad’s headline is “Believe in Something. Even if it means sacrificing everything” and the theme is about working hard to overcome adversity and realise your dreams. It features upcoming as well as famous athletes from various sporting fields, who have faced challenges, regarding gender, racism and disability.

Nike have a history of courting controversy in their ads. They are obviously familiar with the old adage that “there’s no such thing as bad publicity.” Their famous “Hello World” ad featuring Tiger Woods was a comment on inequality in a time where Woods was still banned from playing certain courses because of the colour of his skin.

Nike’s decision to show their full support for Kaepernick is a very powerful and timely social statement. Just like Kaepernick’s 2016 demonstration it has highlighted the huge rifts in American society. Social media has been flooded with angry middle-American’s burning their Nike trainers in protest. Trump has again commented, though this time his words were (slightly) more restrained. It may be that he is aware of an important fact: Nike are in a very powerful position: remember they are a multi-billion company who supply all 32 NFL team kits. The numbers are on Nike’s side. They know their audience is international, and much larger than the angry Trump-supporting Republicans. They resonate with millennials, the left leaners and importantly they want to be seen on the right side of history, supporting equality and diversity. They know they can afford to lose a few “#MAGA trainer-burners.” In fact, despite an initial dip in shares, they have seen their sales rise 31% since the advert aired.

The thing that’s interesting to us here at M3.Agency is how with this ad, Nike are using their own powerhouse of a brand and harnessing the power of sport to attempt to move America forward, and ultimately unite people. It’s important that we recognise that advertising still has a powerful role to play in society and has the ability not only to comment, but to change perceptions and beliefs. Kaepernick’s actions will be remembered and referenced long after Trump and his supporters have shuffled off their mortal coil. It’s not often these days we see a brand act with such bravery with their advertising. A few have tried and failed. Remember last year’s Pepsi ad fiasco featuring Kendall Jenner?

Over the last few year’s the biggest talking points around UK TV ads has been what the supermarket Christmas ads are going to be. Now while Nike are ultimately a business and will have done the maths before this launch, it's still encouraging to see a brand use their position to make a relevant statement on society. And once the furore around the ad dies down, hopefully its postive message will be remembered.

To find out more about how our creative news services can help better your business, call or email info@m3.agency.

We’re excited to announce that M3 has been appointed by West Midlands Metro as its creative agency, and over the next two years our team will deliver advertising, digital development, internal communications and media buying for this important regional business.

M3 accelerates with MG Motor UK appointment - M3 is celebrating a high-profile account win after it was appointed as the creative agency for MG Motor UK Ltd, one of the UK’s best-known automotive brands

The Power of Photography

On World Photography Day, we’ve listed our top 10 selection of iconic and powerful images, which all serve to prove photography’s ability to change opinion and impact the course of history.